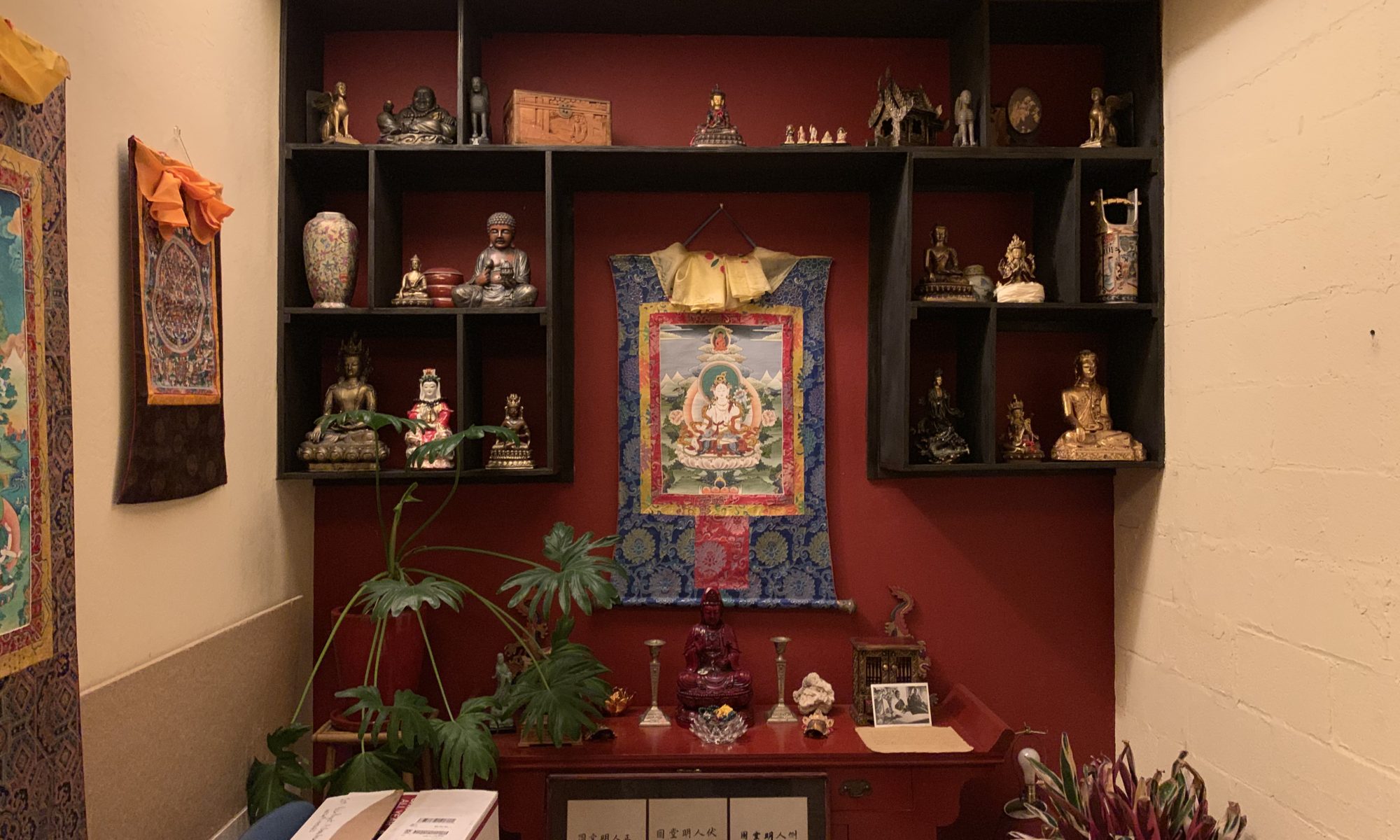 We are extremely happy to announce the tenth anniversary of our Mindfulness In Healing sangha on Wednesday, June 19, 2019. The sangha was founded by Jerome Freedman, Ph. D. on the summer solstice in 2009 as a means to give back to his community after being in remission from bladder cancer which began in 1997 and flared up in 2003. After four or five more bouts of bladder cancer, he is now cancer free once again, thanks to immunotherapy.

The sangha has consistently met at the Pine Street Clinic in San Anselmo (Marin County, California) on Wednesday nights. We are totally grateful to Michael Broffman and the Pine Street Clinic for letting us use their facility for the past 10 years. The clinic is famous for their research on dogs sniffing ovarian and uterine cancers.

Soon after forming the sangha, Jerome invited Carolyn de Fay, LCSW to join as a co-facilitator so that we could hold sangha when one of us was indisposed. We have been facilitating together most of the time.

Our practice begins with inviting the bell followed by an invocation and thirty minutes of sitting meditation. This is followed by tea breaks and the evening program, which consists of dharma sharing, dharma discussions and / or dharma teachings by Jerome or Carolyn. We end with the dedication of merit.

Vivian Taube joined the sangha in 2014, as a regular member. She is grateful for a sangha, where she can discuss her healing from schizoaffective disorder openly, as the sangha’s original intent was to support people and care givers in their healing process.  In 2017, she decided to aspire to the Order of Interbeing, and she chose Jerome and Carolyn as two of her OI mentors.

My appointment with Michael Broffman at the Pine Street Clinic took place this afternoon for about two-and-one-half hours.

ItÃ¢â‚¬â„¢s all about aging. Bladder cancer is a disease in older men (and women). More about this later.

Michael said that I needed about 50 grams protein/day with about 2 quarts of water, a minimum of 1000 calories, and a low carbohydrate intake. Some of the protein can be gotten from rice or whey powders. This amounts to about .78 grams/kilo of protein. In connection with protein, he mentioned the research of Otto Warburg and Brian Peskin. Warburg got a Nobel Prize for demonstrating that oxygen deprived cells develop cancer. I asked about hyperbaric oxygen therapy and he said that it would be good for this reason.

I asked about what other treatments he would recommend and he gave me three ideas. The first is a substance called Gc-MAF. There is a Google video, which explains, Ã¢â‚¬Å“GcMAF triggers our immune response to cancer. Cancer cells deactivate Gc-MAF. Dr. Nobuto Yamamoto has shown that laboratory preparation and injections of GcMAF bypasses the cancer’s deactivation process and allows the macrophages to attack. This procedure has resulted in 100 percent cure rates for 4 to 7 years, the length of the studies to date. There are no side effects.Ã¢â‚¬Â Michael said that you had to inject the Gc-MAF to be effective.

The second product in MichaelÃ¢â‚¬â„¢s bag of tricks is DCA or dichloroacetate. According to the DCA site, DCA Ã¢â‚¬Å“worked to reactivate the apoptosis mechanism of cancer cells, causing rapid shrinkage of tumors in rats. Mitochondrial reactivation represents an entirely new approach to treating cancer.Ã¢â‚¬Â He recommended taking this during BCG treatments plus about 6 months. The dosage of 500mg corresponds to about 1/8 teaspoon and 100g should last me through the whole treatment. Sodium dichloroacetate can be purchased in Canada, but not in the US.

The third product is resveratrol. According to Life Extension, Ã¢â‚¬Å“Findings from published scientific literature indicate that resveratrol may be the most effective plant extract for maintaining optimal health and promoting longevity.Ã¢â‚¬Â IÃ¢â‚¬â„¢ve know about this for a while and almost ordered it several months ago, but I failed to do so.

The anti-ageing plan begins after BCG with a 24 hour urine test for hormones and their metabolites. The goal is to bring testosterone up to the level of a 35 year old man. There will be herb supplements to support hormone replenishment. Another hormone of interest is aldosterone. A constitutional homeopathic remedy may also be used in this project.

New cancer treatments include HIFU in China. This stands for high intensity focused ultrasound and may now be available in the US.

I spoke about two other conditions that concern me. The first was acid reflux when I have too much food or lots of garlic and onions. Michael told me that the active ingredient in Tagamet, cimetidine is not only good to relive acid indigestion, but it has some immune and cancer fighting qualities. So I guess it is not too bad to rely on this when conditions dictate it.

My sleep problem could be helped by time-release melatonin. He said the blue or red lights donÃ¢â‚¬â„¢t upset melatonin metabolism.

Both Mala and I felt really encouraged by this session. It seems like the BCG treatment is just a bump in the road and I should be cancer free when it is complete.

My catheter was finally removed this morning with such great relief. The only bad thing about the meeting with Dr. Neuwirth was that the pathology report showed that more cancer had been resected, but this doesn’t change the treatment plan. We finally got the feeling the Dr. Neuwirth was behind us all the way with using the Shipley method.

We stopped by the Pine Street Clinic to pick up a powered form of the Traditional Chinese Medicinal herbs that Michael Broffman had prepared for me. Luckily, Michael was available for a brief conversation about the latest pathology report and Dr. Neuwirth’s attitude. He felt strongly that it was still in my best interest to proceed with the Shipley protocol.

Later in the afternoon, I received a call from Dr. Keith Block, an internist who has put together a staff of oncologists, herbal chemists, dietitians and others who offer a combined program of chemotherapy, herbs, diet, psychological support, exercise and stress management. He is a friend of Dr. Rossman and I had placed a call to him as far back as February 9. Dr. Rossman and I had several email messages going back and forth, and finally he called back.

Dr. Block told me that he had a holistic program that attacked the cancer cells at the molecular level. He uses intervenes nutrients combined with oral agents and a detoxification program to reduce the side effects of the chemotherapy. He uses fractional dosages for optimum effectiveness combined with patient comfort. The rest of his life-affirming program consists of nutrition, exercise, supplements and stress management techniques.

I really felt confused after speaking with him, as he likes to treat patients in his facility in Evanston, IL. While it is not out of the question for me to travel to Evanston (after all, I spent three years of my life in Chicago and three years of my life in Evanston!), I would be giving up all my support systems back in the Bay Area. So after an excellent guided imagery session with Leslie Davenport, a very supportive conversation with Dr. Rossman, and a good night’s sleep, I felt better about staying with the plan I already had in place.

Friday morning, I had to have a sonogram for my gall stone. Aside from the long wait, it went fairly smoothly. When I finished, my friend, T. R. was waiting for me. We had breakfast together and talked about my options.

After T. left for work, I joined a cancer support group at Marin General led by Leslie Davenport. She had worked with my wife the previous year doing guided imagery for her hip problem that was caused by an automobile accident in 1992. I was the only man, but this didn’t stop me from trying to find out what was the best course of action. One of the women said that she had no side effects from the chemotherapy whatever! 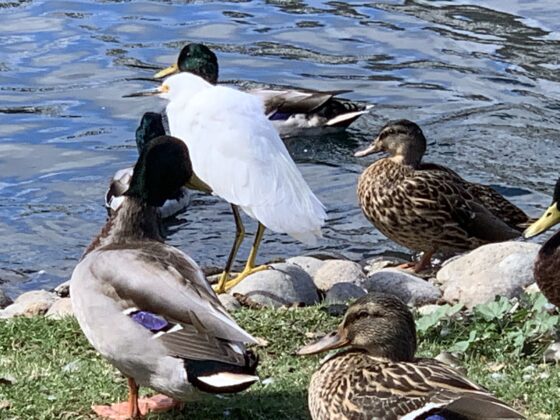 In the early afternoon, I had another session with Yokey Kim. Once again, I had a wonderful treatment.

Then came the long-awaited appointment with Michael Broffman, a Chinese herbalist and acupuncturist, who runs the Pine Street Clinic. He has a fabulous reputation for knowing a lot about cancer, and my wife and I were blown away by his knowledge of bladder cancer. We talked at great length about alternatives to radical cystectomy. One surprising note was something that no other physician mentioned. Michael said that after seven or more years, they may have to go in for another operation for the urinary diversion. After this statement, decision was really moving rapidly towards the Shipley approach! Michael proceeded to tell us that there is a lot of bladder cancer in China and that a combination of traditional Chinese medicine and chemotherapy, with or without radiation, is the primary means of dealing with the disease.